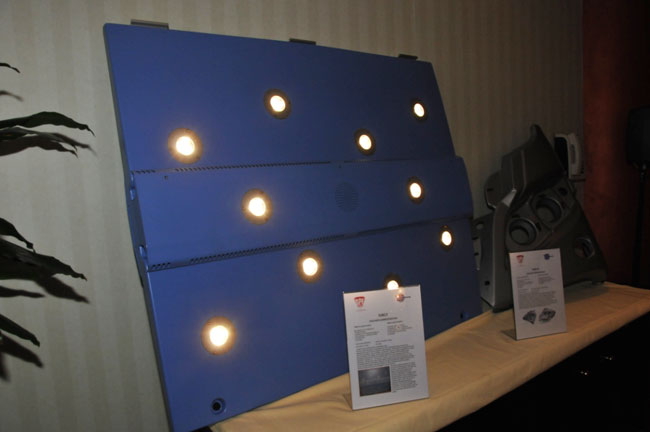 Vitalo has chosen this part as it represents the future of thermoforming. In this future, thermoformers need to act as complete system suppliers. The part must be plug and play and delivered according to strict schedules. As the part is used for a railway application, at design and development, the supplier must be able to process detailed APQP structures and demanding requirements, like fire standards (DIN 5510), glue standards (DIN 6701), traceability standards, etc.

The future for railway surely holds thermoforming as it is the technology with the lowest part weight, highest design freedom and lacquering free surfaces. The biggest threat for this market segment is the new European fire standard, EN45545.

By closely working together with sheet suppliers to find a solution for the fire standard, thermoforming can become the standard in railway interiors. This part is a glued assembly of 2 single sheet thermoformed parts of only 2,5mm thickness. As the material is PC/ABS, the flatness and forming tolerances are difficult to maintain and therefore requiring a high degree of quality control during production.

In the assembly, an aluminum frame is glued in between with a polymer glue to cope with the heavy vibrations and thermal expansion differences. All wiring for the lightning and speaker is also pre-assembled. The central cover is a metal coated profile that is an exact match with the color of the plastic.

Subscribe to our newsletter, so you will not miss any news from us.